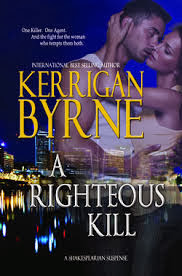 WOOHOOO!! Today, I am reviewing a VERY good book by Kerrigan Byrne called, Righteous Kill. The title may sound like a mystery but its a romance! I couldn't freaking believe how absolutely good this book was and I hope you take my review to heart, and try this book out and hopefully, you all will love it as much as I did.
Note: I received a ARC copy of this book for an HONEST review.
BLURB:
"'Tis one thing to be tempted, another thing to fall."~William Shakespeare, Measure for Measure.


A prolific serial killer is crucifying and 'baptizing' the working girls of Portland, and FBI Special Agent Luca Ramirez is locked in a desperate race to prevent the next casualty. The game changes when the latest victim is pulled out of the Willamette River alive, and Luca knows this witness may be his key to breaking the case. When the fanatical killer threatens her life a second time, Luca is assigned to protect the most unique and captivating woman he's ever met by going undercover as her lover. He finds himself locked in a relentless game of cat and mouse with an elusive and violent psychopath, while battling his temptation for the alluring woman he's charged to protect with his life. As the fatalities continue to mount, so does the intensity of his desire for a woman who should be forbidden, but is determined to dial up the heat.

International bestselling author Kerrigan Byrne laces dangerous, edgy content with palette-cleansing humor in this sexy, character-driven series debut that will leave you wondering... Is there such a thing as A Righteous Kill?
MY REVIEW:
When I was asked to read this book I was worried that it had more mystery and murder then actual romance. I can honestly say that I have never been more happy to be SO wrong. Even though there was quite a bit of mystery there was just as much romance between the victim, Hero and the sexy FBI agent Luca. Righteous Kill had some surprising humor too. Hero was a such a unique, yet fitting name for such a strong and brave character. Even though she went through something traumatic, it did NOT stop her from trying to live her life with both humor and bravery. When Kerrigan threw Luca in the mix and made him Hero's lover, sparks flew, passion soared, and love blossomed. This was the first book that had me looking out my window wondering if there was a psychopath out my door wanting to torture and kill me and being VERY glad I don't live in the city. I was NOT expecting such a strong plot or such great humor and roaring passion. I can definitely say I will be anticipating the next book in this new series by Kerrigan Byrne. After reading this story, I knew I had to give this a rating it deserved. I gave this a FOUR AND A HALF OUT OF FIVE STARS!! That's right, this book was wonderful and well written. A true masterpiece!
﻿
Posted by Marie's Tempting Reads at 3:12 PM 2 comments:

My Demon Determined by Alicia Dawn and Nikita Jakz Review 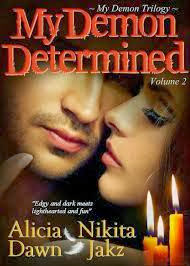 Today I have the pleasure of reviewing the second book in the My Demon Trilogy by Alicia Dawn and Nikita Jakz. I received an ARC copy of this book for my HONEST and TRUE REVIEW!


BLURB:
“Into the bowels of hell I would follow you.”
“Good because that's exactly where we’re going.”
Never in her wildest nightmares did Seraphina see herself taking refuge in the underworld. Cole, however, should have seen it coming. Sera’s kin would never let her go and that was the one place their holier-than-thou feet couldn’t tread. Unfortunately, residing in a realm where the vilest of depravity thrives only adds to Cole’s problems. Now he must keep Sera safe from not only her kind, but his debauched brethren as well. Even Cole’s demon-half has become more volatile, the constant subjection to evil taking its toll. His world is no place for an angel. He needs to find a solution so he can get her the hell out of there.
And he needs to find it fast.
When the opportunity arises to finally solve their dilemma, he jumps at it with talon-claws swinging. But it’s a dangerous mission - and Sera’s riding shotgun. As deadly adventures unfold and all hope seems lost, Cole is forced to search inside himself. With a soul that’s riddled with more questions than answers, can he find the lifeline they need?
MY REVIEW:

This book was A-M-A-Z-I-N-G! I was utterly and truly glued to my e-reader as I was reading. There was just as much action, scorching love making scenes, and witty banter between these characters as there was in the first book. Some scenes had me squirming in my seat and panting with excitement. It was just...DECADENT! My Demon Determined  was a thrilling second book in the My Demon Trilogy. I enjoyed reading more about Seraphina and Cole. I got to see the struggles they go through as they find away to be together and escape the clutches of the angels since they want Sera back. Cole was one of those males you read about often: Arrogant, handsome, determined, and downright sexy as..well hell. I give this a Five out of Five Stars! I highly, and I mean HIGHLY recommend you pick this story up along with the first book, My Decadent Demon if you haven't already done so. It's short, but not too short, yet amazingly written with some witty banter and good, strong characters. Alicia and Nikita, I cannot wait to see what you have in store in the third and final installment. WAY TO GO!
﻿
Posted by Marie's Tempting Reads at 9:38 AM No comments: 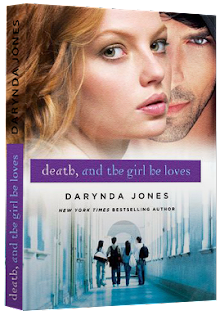 The fate of the world is not something a girl wants on her shoulders, and that is especially true for Lorelei McAlister. Unfortunately for her, that is exactly where the world’s fate has decided to take up residence. Lorelei has seen firsthand the horrors that lie beneath our everyday world. And those horrors are getting her friends killed. Because of this, she agrees to leave the sanctity of her hometown and is sent to a different world entirely. A boarding school. But even here she is being watched. Someone knows what she is. What she carries inside her soul. And on top of that she’s seeing visions. This is nothing new for Lorelei. But these visions are something more: death, destruction, and the end of the world. Lorelei must face the fact that there are people who want her dead, and no matter where she goes, no matter how far she runs, the lives of her friends and family are in mortal peril. Lucky for her, her friends and family include the handsome Angel of Death, a fiercely protective half-angel, and a ragtag group of loyal supporters who aren’t afraid to get a little dirty in the name of fighting pure evil.

Note: I was giving a ARC copy of this book through Netgalley for my honest and TRUE review.


MY REVIEW:
I give this a FIVE OUT OF FIVE STARS...BIG ONES!! I was absolutely and utterly amazed and pleased with the final installment to the Darklight Series. This book was everything I hoped for and more. I couldn't believe how the story twisted from one reality to the next and almost back again, INCREDIBLE! I think I have an even bigger crush on Jared now then I did before reading this story. He is just...perfect. Him and Lorelei, Brooklyn, Cameron, and Casey aka Glitch, are some downright fun and epic characters that will no doubt end up being the ultimate best characters out there, especially in the YA world. I met some new characters and seen some twists that will leave your jaw hanging open, that left me completely stunned in the BEST way. I want to so bad, to say more about this book, but I just can't be that cruel and giveaway the story, so if you haven't picked this book up what are YOU waiting for? I honestly can say this book ROCKED and I can't believe this is the third and final book in this incredible series. I am dying to know though...what will Darynda Jones come up with next?
﻿
Author Bio

NY Times and USA Today Bestselling Author Darynda Jones has won numerous awards for her work, including a prestigious Golden Heart®, a Rebecca, two Hold Medallions, a RITA ®, and a Daphne du Maurier, and she has received stellar reviews from dozens of publications including starred reviews from Publisher’s Weekly, Booklist, and the Library Journal. As a born storyteller, Darynda grew up spinning tales of dashing damsels and heroes in distress for any unfortunate soul who happened by, annoying man and beast alike, and she is ever so grateful for the opportunity to carry on that tradition. She currently has two series with St. Martin’s Press: The Charley Davidson Series and the Darklight Trilogy. She lives in the Land of Enchantment, also known as New Mexico, with her husband of almost 30 years and two beautiful sons, the Mighty, Mighty Jones Boys. She can be found at www.daryndajones.com.