Enslaved By The Moon by Morgan Fox snippet and pre-order link: 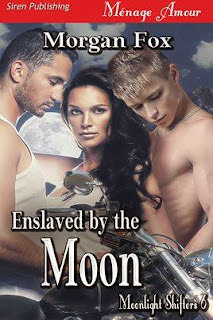 Here is a little snippet for Enslaved By The Moon, Moonlight Shifter 6, coming December 25th:

Her heart fluttered in her chest as she roared to the moon above. The blackness set aglow by the twinkling stars, full moon and flickering of lightning in the distant sky. A thick wall of clouds moved in, the scent of rain in the air. The wind blew, but suddenly changed direction, swirling a musky fragrance into her nostrils that had the hair rising all over her long, curvy spine. Her tail whipped from side to side as she felt the tension of the night air thicken. The aroma was unmistakably familiar.In panther form, Bianca ran. Her legs pumped as she darted and juked around trees, boulders, brush, anything and everything that lay in her path. She prayed her feet would keep moving and allow her a chance to reach her cabin. She wasn’t ready for this. She thought she had more time.A wall of strength crushed into her, knocking her over and sending her stiff body slamming against a hundred-year-old white oak tree. The air whooshed from her lungs, her body gasping for breath.Stunned, she shook her head, clearing the sharp reminder of pain from her eyes. She sniffed the air, seeking out the object that had forced her body to fly out of control. Her panther eyes scanned her surroundings, but found nothing. Then she felt the power of the hybrid, his breath on her neck, clinging to the low limbs of the tree above her.Bianca growled, bolting away from the branches. In seconds, Ryder pounced on her. They fought with claws and teeth tearing at one another. Ryder’s sharp fangs sank into the flesh of her hind leg and she cried out with a wild yelp. Instantly, he released her and with his massive paw, swiped her legs out from under her, forcing her body into a roll. Wedged between objects, she thrashed around to flip over, trapped on her back. Just as Ryder jumped on top of her, the sky above them cracked with a thunderous boom. Rain from the heavens poured down on them, soaking the earth and pelting them with heavy raindrops.He’s going to kill me like some savage beast. Bianca had wondered, night after night, how Ryder would end her life. She wasn’t strong enough to beat him in a fight and it would only be moments before the job was finished. But she didn’t want to be a panther when she received that final blow. She wanted to be the woman she’d been when the mating attraction had begun to call to her. When instinct and her heart had told her that Ryder was the one she was destined to be with. If she couldn’t love him as a mate should be allowed, it was only poetic that he should be the one who destroyed her, body and spirit. With a deep inhalation of breath, Bianca shifted into human form. Ryder’s golden panther eyes pierced into hers, his teeth nipping close to her face. He was growling as if to yell at her for changing forms. Then he backed away and shifted before her eyes.The blackness of his panther, surrendered into a tan-skinned man with eyes so deadly, she couldn’t hold their penetrating glare. Her body shivered, as she lowered her eyes to drink in the size of his defined broad chest, chiseled abdominals, and the V-cut sinew located below his belly button and above his cock. Her breath hitched as she beheld his swelling shaft, jumping as if to command her attention stay focused on his perfectly erect penis.She swallowed hard, studying the tension in the muscles of his body. His long legs stood shoulder width apart, his bare body damp with rain. She hadn’t given much thought to the fact that she lay naked on her back in the mud, resting on her elbows with her legs slightly spread. If she were any other woman, surely Ryder would welcome the sight. His erection was just a reaction to his transformation into human form. Perhaps it was even the thrill of his potential kill.“Why did you shift back?” Ryder shouted, the rain falling harder. “Damn it, Bianca. I don’t want to look at you like this.” He glanced away from her, his eyes searching for something in the near darkness. The air fled from her lungs, her body shuddering, but not from cold. “If you are to kill me, you will do so with me as bare to you as my soul is.”His piercing gaze snapped back in her direction. She swallowed hard, hating the disgust firing in his eyes. She wished more than anything to have seen love or desire looking back at her, but she didn’t. Deep in her heart she had hoped that no matter what, Ryder would be able to see her for the person she truly was and not the monster he assumed her to be.I will die just as I lived. Alone.Her fingers dug into the saturated ground beneath her. She needed something to anchor to. Her body shook terribly. “I’ve spoken only the truth to you, Ryder, and I have no secrets. I will go to my grave knowing that I never betrayed you or our people.” She moved from her back and repositioned herself onto her knees. “But for the pain I have caused you, it will be a death I deserve.” Her eyes welled with tears. “I pray it brings you and your friend’s peace.” She placed her arms behind her back, clasping her hands together, and bowed her head, offering herself to him in sacrifice.

The buy link is below along with a few more links to connect you to the fabulous Morgan Fox herself!!