ARC Review No Escape From War (Trouble For Hire #1) by Cynthia Eden! 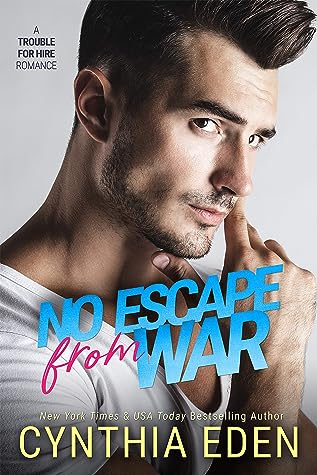 Revenge. Oh, it was going to be sweet.Warren “War” Channing finally has the chance to nail his beautiful, lying ex. And, no, he doesn’t mean “nail” in the down and dirty sexual way…War means he has the opportunity to send the lovely and infuriating Rose Shadow to jail. Turned out, the woman who had shattered his heart beneath her high heeled shoes was wanted for murder. She was on the run, and he was just the man to hunt her down and toss her into the nearest cell…War could hardly wait.He was the last man she expected to need.The breakup had been ugly. Painful. It had ripped out her heart and left her in a sad, crying heap as she ate her ice cream, but Rose had moved the hell on, and she had sworn to never, ever need War again. Except, well, now she did need him and his sneaky skills because Rose was in trouble up to her eyes. The kind of trouble that could wreck a woman’s life.He’ll make her pay.Rose has cracked the story of a lifetime. She’s uncovered a brutal serial killer who has been hiding in the shadows—only now, she is his next target. The cops think she’s involved in the string of murders because maybe her DNA had been at a crime scene and maybe she’d been spotted by witnesses at another location, but Rose is a reporter—she’d been at the scenes because she was tracking down the real killer. Now, though, because War has caught her, Rose is out of time and options. War is former special ops. He’s the best PI in town. And he’s the man who gave her more pleasure than should be legal…Too bad that he’s also the man who hates her the most.Forty-eight hours…then jail.They make a grudging deal—she’ll pay him anything he wants if he just gives her forty-eight hours before he turns her over to the cops. During that forty-eight hours, he will help her track the real killer. When the clock runs down, she’ll be out of his life for good. Except…a whole lot can change for two people in forty-eight hours. Hate can turn into desire. Need can rage out of control. And a love that you thought was long dead? It just might flash to life again.Provided, of course, that the murderer hunting Rose doesn’t manage to kill her before she and War can catch him. Forty-eight hours. The countdown starts now…Author’s note: The “Trouble For Hire” romance series features hot, former military heroes…and these guys truly are the best kind of trouble. All of the books are stand-alones with guaranteed happy endings. Danger, romance, action, suspense, humor…oh, it’s definitely time to find some trouble…

Finished No Escape From War by Cynthia Eden WAAAAAAAY too fast and LOVED every action packed, sexy, thrilling and fun ride of this brand new series! This book was one I found myself not wanting to put down even for a second. It was amusing at times, and so sexy at others, I found myself breathless and squirming in my seat.

War and Rose have this undeniable, irresistible chemistry that you can feel the tension between them from the moment the two got together. War is tough, sexy and goes after what he wants with a stubbornness and determination that is beyond hot while Rose's dedication to catching the serial killer who is hot on her heels admirable and I easily could picture her being the kind of person that I would love to have in my corner as a friend. She is smart and sweet and gorgeous and is really the perfect match for someone like War. This book was full to bursting with pulse pounding action, danger and suspense as well as romance so steamy, you can feel the heat straight off the pages. It was also a lot of fun and kind of reminded me a bit of the romantic comedy Bounty Hunter. I found myself giggling and grinning more than once. I loved it! I can't wait to read about Odin's HEA too in the next book, Playing With Odin. I am seriously addicted to this new Trouble For Hire series and want ALL the books!

No Escape From War gets a DELICIOUSLY ENTERTAINING FIVE PULSE POUNDING STARS!

Posted by Marie's Tempting Reads at 3:36 PM No comments: 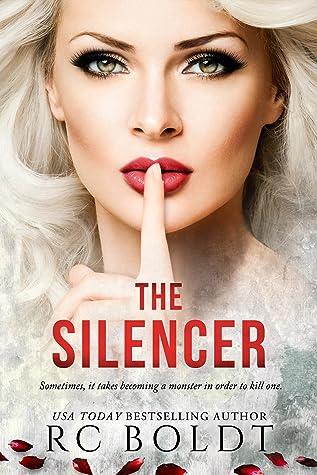 USA Today bestselling author RC Boldt brings us an unforgettable tale of betrayal, vengeance, and redemption in her new romantic thriller, THE SILENCER...No one wants to admit that sometimes only evil can extinguish other evil.Each time I drain the life from their bodies, I inch closer to purging my past.Then a by-the-book FBI agent—one as astute as he is handsome—threatens my plans...and what’s left of my heart.He doesn’t believe there are exceptions to breaking the law. That’s where we differ.They once silenced me and countless others, but now I’ve reversed our roles.Because, this time, it’s my turn to be the silencer.————————————————————**The Silencer is a dark and gritty romantic suspense that deals with sensitive topics which may not be suitable for all readers.

First off, I am still recovering from this whopper of a story. And second, I want you all to know right now, the heroine sticks out to me the strongest in this particular story than the hero. This is a heavy story everyone with some serious heavy subject content but I am telling you all, this book is worth reading and is worth EVERY single star this book gets!

As I was reading The Silencer, I kept thinking the heroine reminded me of Dexter. And I LOVED Dexter! Kennedy is the most BAD A** heroine EVER! Hands down. What she went through and what she grew up doing made me be in awe of her. She is fierce and beautiful, like an avenging angel. Landon is a charming hero and is just as fierce in his desire to put a stop to these bad guys, even if his brand is much nicer than they deserve. And you can feel the way Landon and Kennedy connect. Its like a roaring fire that consumes them but instead of burning out of control, it  settles to a gentle flame that warms the heart. I so enjoyed their connection and passion.

The Silencer is a hard subject book that will tear your heart to shreds and blow your mind and aim to seek your own brand of vengeance on these types of bad guys. I freaking loved how powerful and ALL consuming this story was. I don't usually ever read these types of stories because this type of subject is so difficult to hear about. But honestly, Kennedy is what made this book and the difficult subject ok to deal with. Her strength and what she does not only give herself some relief, but it also helps others that were tormented by these bad guys too. I am seriously crushing on this heroine and I don't think any book can compare to this amazing, powerful, YOU'LL NEED TISSUES AND A STRONG DRINK story that left me hung over for DAYS! I haven't read ANYTHING like this and I doubt anyone else could write this type of story with the difficult subject in a way that would draw readers and have them feeling like they just read something that blew them away and caused such a ruckus with their emotions. That is why I am thrilled to say, this book is getting a TEN EMOTIONALLY CHARGED, TOTALLY CRUSHING ON THE HEROINE STARS! This story is AMAZING!!

Posted by Marie's Tempting Reads at 4:16 PM No comments: