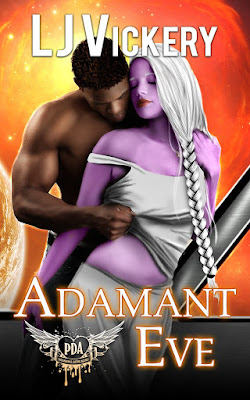 Marek Stasky isn’t sure about this trip to Gemma-Hydrox, but he has no choice. He signed an agreement with Gerri Wilder, the galaxy’s foremost matchmaker, before he knew the particulars of the inhabitants. Now he’s just confused. Since he doesn’t follow the, uh, proclivities of the natives, why exactly has Ms. Wilder recruited him? As the planet’s twin suns appear on the horizon, he knows he’ll soon find out. But that’s as far as it will go. No one can force a new lifestyle on him. No siree.
Eve doesn’t understand why she’s been assigned to take care of the luscious visitor from earth, but she knows she likes the way he looks and acts, way too much. Cautiously she allows herself to study him. But if she lets her interest show, and the lords find out, punishment will be dire. As she stands ready to serve, she judiciously keeps her head down and her mouth shut…until the human asks her a question. Excerpt:
Eve held the carafe steady, waiting to see if he’d move his hand from the rim of his chalice, but he didn’t. Instead, he turned and looked directly at her. Her knees threatened to collapse. His gaze, which she allowed herself to regard ever so fleetingly, was rich, warm and tawny brown, with flecks of henna and russet. The color of fallen leaves just before the season of ploosh wrapped the planet in its cold embrace. It warmed her right to the ends of her purple toes.
“Is that alcoholic?” he asked, tipping his head in the direction of the carafe. Oh, my lords. He spoke. She stared at the Adam's apple that bobbed enticingly behind his bow tie. “Yes, sir,” she said. Without meaning to, her tone became breathless. “It’s lyricalle, sir. Everyone enjoys it.” She, herself, barely remembered what it tasted like. She’d stolen a sip from her father’s holiday cup one time long, long ago.

THE LATEST PNR FROM LJ VICKERY IS AS POWERFUL AS A ROUNDHOUSE KICK! IT WAS SUCH A STUNNER OF A READ WITH ANOTHER SPECTACULAR SETTING AND AMAZING CHARACTERS AND A FANTASTIC PLOT!

Readers will undoubtedly enjoy Adamant Eve as much as they enjoyed Keeping Pace...maybe even more so. The characters are so unforgettable and the story sizzled and just plain rocked. I loved the world the story is set in so much. Its extremely cool and fascinating. The romance is so unique and wildly appealing and the story drew me in from the very get go and I didn't want it to end!