ARC Review - Sins of Long Ago by Naomi Bellina 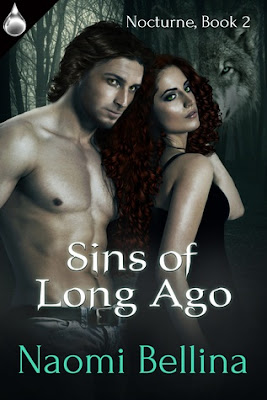 A curse haunts her, a predator is stalking him and his pack. Vincent doesn’t need a woman in his life, and Genevieve is doomed to go insane if she falls in love. When danger brings them together, they find that desire demands satisfaction. But first they have to find a way to break the curse and catch a killer! Filled with passion, action, and suspense, Sins of Long Ago by Naomi Bellina is a welcome addition to her paranormal romance series, Nocturne.

Leading his pack of werewolves keeps Vincent plenty busy, and now with a predator out to harm them, life is more perilous than ever. The last thing he needs is a woman to complicate matters, especially one who sets his body and soul on fire. She’s a human and a witch—totally the wrong woman for him. Even if he could take a mate for his own, he refuses to put her in the danger his life has become. No way can they ever be together. Werewolf-style love is fine anyway. No permanent partner, no bullshit, no heartache.

Genevieve has never known true love. Cursed by an enraged woman long ago, females in her family are doomed to go insane if they fall in love. Life has been fine without a man around—until a hot werewolf drops in and captures her heart. Though they have plenty of obstacles to overcome, Gen knows they can work past them. Tell that to Vincent, as he struggles with old pack rules about love, sex, and consorting with humans.

As Vincent searches for a killer, deals with death among his own, and tries to keep his hands off Gen, she attempts to end her family curse. Together, they must find a way to break free from the sins of long ago.

What can I say about Sins of Long Ago by Naomi Bellina....WOW...just WOW! This book was a real page turner. It was exciting, spicy, sexy, and freaking AWESOME as hell! Its splendidly written and makes an excellent read.

I really liked the characters, both main and secondary. Everything about this story was interesting, from the shifters, witches, curses, and plot. Vincent makes one hell of a sexy and unpredictable hero while Gen is smart fun and has a determination like no other to stop the curse that was put on her family. The sexual tension between these two crackles. Sparks fly with every touch and the sex is freaking SCORCHING!

Naomi Bellina blew me away with this story, so its with great pleasure that I give this book a FIVE SHOOTING STARS! From start to finish this book will keep your attention and have you begging for more.

Posted by Marie's Tempting Reads at 9:53 AM