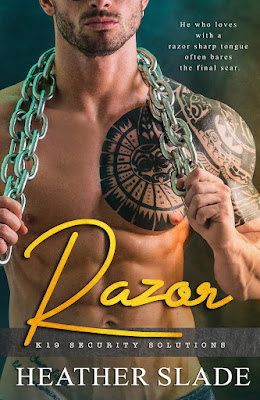 K19 Security Solutions partner, Tabon "Razor" Sharp has seen his fair share of tragedy, but one thing is for certain: he never forgets a face. Agreeing to be his buddy's groomsman means he'll once again reunite with the enchanting and gorgeous, Ava McNamara. Unable to finish what they started last time, he's more than ready to reignite the spark with Ava.

But the wedding brings on more than he bargained for. Meeting Ava's father throws a wrench into his plans. Her father isn't who he claims to be. And Razor is determined to uncover all the facts. Torn between exposing a criminal and protecting Ava, he struggles between duty and desire. Now, it's up to Razor to protect the woman with the haunted eyes even if it means destroying everything she's ever known. Will they recover from the truth or will Razor's cut wound her too deeply?

When Razor’s best friend sat him down and told him it was time they both grew up, he thought maybe that outta be a wake-up call. And then, when he took it a step further and said he no longer wanted to be called “Paps,” like he had been for almost fifteen years, Razor decided that, maybe, it was time to check the mirror to see if he was getting as gray as his friend was.
Gunner “Paps” Godet had been Tabon “Razor” Sharp’s fellow Marine, sidekick, partner in crime, wingman, and confidant since they’d both arrived at the Marine Corps Recruit Depot in San Diego for boot camp. It had been a fluke that Godet was even there. Given Gunner was an East Coast boy, he should’ve been sent to Parris Island in South Carolina. But his dad was a USMC O-8, also known as a two-star, who oversaw the base at Camp Pendleton, north of San Diego. That meant Gunner had his pick.
Razor hadn’t cared either way, although everybody he served with later, told him how damned lucky he’d been to end up where he had.
“What the hell are you doin’ now?” Gunner asked.
Truth was, he was standing in front of a mirror, giving himself a pep talk. It wasn’t being a groomsman in their mutual friend’s wedding that worried him, or even that K19 Security Solutions—the company he and Gunner owned with two other partners—was morphing so quickly he hardly recognized it anymore. Instead, it was the woman his friend’s fiancée had paired him up with in the wedding party.
Avarie McNamara, who he should’ve forgotten months ago, wound up center stage in every fantasy he had when he needed to take the edge off. It didn’t help that the one and only time he’d met her in person, she was wearing the hottest damn bikini he’d ever seen.
She’d let him know, in no uncertain terms, that she was interested that day, but he hadn’t been able to take her up on it. He’d been on the clock, filling in as her friend’s bodyguard long before she knew she had one.
He’d known a lot about Ava prior to her coming on to him that day, but he hadn’t allowed himself to get to know her in the intimate way she was suggesting. 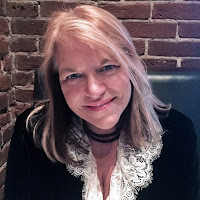 
My books are filled with things that bring me joy:  music, wine, skiing, families, artists, and cowboys.  Not always in that order.  I’m an Amazon best-selling author, and a PAN member of Romance Writers of America.  I speak, teach, blog, am an executive sommelier, and all-around entrepreneur.    I grew up an east coast girl, and then spent half my life on the west coast.  Now my husband, our two boys, and I happily call Colorado home.


Posted by Marie's Tempting Reads at 8:05 AM