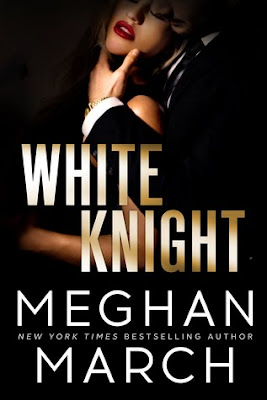 
I never expected to be anyone’s white knight. That’s not a role I’ve ever played.
But when the Casso crime family shifts into uncharted territory, they’re looking for a new hero, and they’re looking for me—Cannon Freeman, the black sheep.
But my time in disgrace is at an end.
It’s my turn to rise up and save the people who matter most to me.
Even if my family has never given a damn about me, I will not let them fall.
More than anything, I will not let her fall.


White Knight is the second book in the Dirty Mafia Duet and should be read after Black Sheep, book one.

HOLY S**T BALLS FOLKS! MEGHAN MARCH ONCE EFFING AGAIN WROTE A DUET THAT DROPPED ME TO MY KNEES AND HAD ME ALL BUT BEGGING FOR MORE! Cannon's story stopped my heart with its intensity and the secrets that were revealed. Cannon is an unstoppable force that will leave a girl swooning for days!

The second book to the Dirty Mafia Duet satisfied me like nothing else could. It was bold, intriguing, thrilling, surprising and hot as hell! Every chapter and every word drew me in and engaged me. I was and still am, excited about this duet! White Knight turned out to be one of those stories you can't help but to want to brag about because its a story worth picking up and devouring in one sitting. There was twists in this book that had my jaw hitting the floor! That is the BEST kind of story to me! One that takes not only my breath away, but knocks me on my butt. It leaves me craving the unexpected and I LOVED every minute of that wild craving!

White Knight gets a KNOCKED ME TO MY KNEES FIVE CRAZY GOOD STARS!
Posted by Marie's Tempting Reads at 1:10 PM