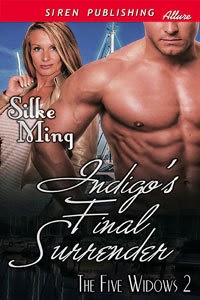 When Indigo West opens her door and comes face to face with the identical twins, she is totally confused. One of the men is her lover Elvis Palmer, but as she stares at them she becomes more perplexed. She has no idea which of them is her lover. She knows that Elvis has an angel tattoo on his left shoulder, but so does Elvin. Have the two brothers been sharing her bed? The more she thinks about it, the more exciting the idea becomes, until she finally ends up between the sheets with them both at the same time. The Widows have no idea that their friend is caught up in a threesome with the brothers. When a gay, female childhood friend from South Carolina appears on the scene, and is immediately attracted to The Widow Autumn Chance, sparks start to fly and the two women become romantically involved.

This is the second book in Silke Ming's The Five Widows  series, and honestly this story was pretty good. I was thrown a little off balance by how the story began. We meet Indigo's lover at the door with his twin brother and she can't figure out who is who. The names alone were a little confusing, Elvis (which is the one Indigo is sleeping with) and Elvin (Elvis's twin). Honestly, the first name made me think of Elvis Presley and the second one made me think of an elf. Once she figures out who the right Elvis is, Elvin leaves and soon Indigo and Elvis are getting hot and heavy together. As much as I enjoy good, hot, sweaty sex, I prefer a romance starting off with the characters interacting together a bit before they actually have sex. Other then that, this story was an easy read, with some interesting and fun moments and some seriously wickedly hot sex, including some fantastic F/F action!

I have always enjoyed the whole older woman (yet not so old you consider them a grandma) with a younger man (again not so young you think of robbing the cradle). There is something uniquely sexy and intriguing about an older woman and younger man falling in love. Especially when the young man knows what he wants and goes after it, just like a real man should which is something you expect a man who is a bit older to do. The connection between Elvis and Indigo is strong and fun and sassy. When these two hit the sheets, sparks fly, passion soars, and the sheets practically catch on fire. We also get a surprise when Indigo gets a visit from a friend who is gay and soon a small fling with her caught my attention and just made me so glad I got a chance to read this story.

Silke Ming puts together a splendid book filled with extreme sensuality, interesting characters and plenty of scorching sex that will leave you breathless, and have you squirming in your seat. However with the way Indigo's Final Surrender began, it did affect my rating just a bit. In the end I gave this a THREE AND A HALF OUT OF FIVE STARS!  Its deliciously wicked and fun. I wouldn't normally say that about a erotic romance, but this one definitely struck me as fun. I am looking forward to reading the next book in Silke Ming's The Five Widows Series.
Posted by Marie's Tempting Reads at 10:53 AM