Only The Negatives Release Blitz with ARC Review! 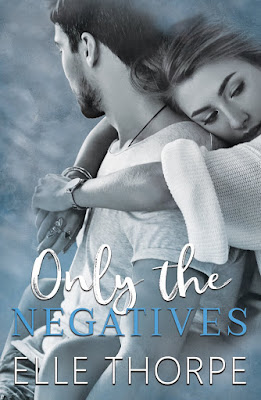 Title: Only the Negatives
Series: Only You, #3. (Can be read as a standalone)
Author: Elle Thorpe

Blurb:
The boy who once made my life a living hell is now the only way to save my family from living on the streets.

I wish he’d just stayed wherever he’s been for the past four years. That is, blissfully out of my life and nowhere near our little country town.

But in my weakest moment, he arrived like some knight in shining armour. One I never wanted or asked for. I should have run him down with my wheelchair. But I didn’t. I got in his car. And now I have to see his beautiful damn face every damn day.

And that’s my worst nightmare. Because the things he once said can’t be unheard. The hell he put me through can’t be forgotten. The man he is now can’t be forgiven for the boy he once was.

And yet, I want him.

A HECK OF A INTOXICATING, EMOTIONAL, LIFE-CHANGING ROMANCE WITH ALLLLL THE FEELS!

Elle Thorpe wrote something AMAZING with Only The Negatives! Its a roller coaster of sensations and emotions that REALLY tug on the heart strings. It made me cry, it made me hurt, it made me fall apart and come back together again. The characters are so real and raw its pretty remarkable. They made mistakes in the past and as they grew up, they changed for the better. The romance is a tug of war that is appealing and sensational and put a major dent on my heart. I loved it!

Only The Negatives gets a INTOXICATING FIVE SENSATIONAL STARS!

ADD TO YOUR GOODREADS TBR

Also in this series...
(all books can be read as a standalone, but it's more fun if you read in order! You'll get updates on old friends in each new book)
Only the Positive - Free on Kindle Unlimited

Only the Perfect - Free on Kindle Unlimited

Only the Truth - FREE for newsletter subscribers

Elle Thorpe lives on the sunny east coast of Australia, about an hour out of Sydney. When she's not writing stories full of kissing and chemistry, she's a wife, and Mummy to three tiny humans. She's also official ball thrower to one slobbery dog named Rollo. Yes, she named a female dog after a male character on Vikings. Don't judge her. Elle is a complete and utter fangirl at heart, obsessing over The Walking Dead and Outlander to an unhealthy degree. But she wouldn't change a thing.