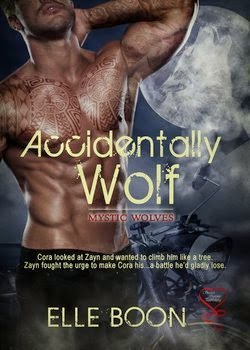 For veterinarian Cora Welch, being bitten by a young injured wolf wasn’t the best day of her life, nor the raging fever that followed. However, finding herself faced with a naked man proved even more than she had ever bargained for.

Zayn couldn’t believe what his inner wolf was telling him when he first saw the human doctor Cora, standing in nothing but a towel. The last thing he wanted was a mate, especially an accidental one. And at a time when danger seemed to be coming at the Mystic Pack from an unknown source, it just wasn’t in his plans.

All he had to do was get Cora through the fever, keep her safe from the other pack, and keep his fangs to himself. But nobody told him he’d have to fight a mating urge so strong within himself, that it was a losing battle. Now, he has to explain to Cora that he accidentally marked her for a second time, making her just like him.

Cora knew something was not right in her world the moment she wanted to climb her rescuer like a tree. Hearing Zayn tell her she was now a werewolf, like him and his pack, she realized she now had a home. If her new mate still wanted her after he heard about her family, Cora knew she’d be happy to be an accidental wolf.

*** SOME SPOILERS BELOW***
Accidentally Wolf is a brand spanking new series by the popular author, Elle Boon. We all know Elle Boon writes the delicious Ravens of War Series and now she hit us again with another series, Mystic Wolves. This story was just as fascinating and sassy and fun as her Ravens of War books. First we have a seriously sexy cover that just SCREAMS yummy, then we get some awesome characters a fun storyline and some wickedly hot sex that will leave you melting. I personally think this new series will be just as good, if not better, than the Ravens of War stories.

I was blown away with the sexy Zayn. He is a fierce protector and is immediately  smitten with the pretty vet, Cora. He shows up at her clinic after she rescues his nephew and it turns out, the young pup accidentally bit Cora and she started to get a fever and when she sees Zayn, she wants to pounce on him in the most sexual of ways. Zayn didn't think he needed a mate till the chemistry between these two get out of hand and he finishes what his nephew started by finishing the transformation and ends up mating Cora. I really loved how sweet and sexy Zayn was and how he seemed to really come alive for me in this romance. Cora is a little spitfire that can't seem to understand her immediate attraction to Zayn. That is, until Zayn lets her know she is now his mate. But it doesn't take Cora long to realize this may be the best thing that has happened to her. Cora is pretty, sassy, and just a real fighter.

Posted by Marie's Tempting Reads at 10:33 AM