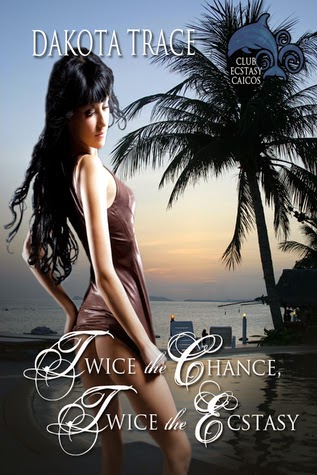 Calypso has been given a task…

Divorcee, Eryka Desmonte, wants to find the sexual gratification that had been lacking in her marriage. So she’s willing to try anything, including signing up to meet two potential lovers at what used to be an abandoned resort in West Caicos. Now run by the reclusive Ms. Calypso, Club Ecstasy Caicos boasts of the most lavish accommodations and sinful temptations. Eyrka just prays the resort’s owner knows her business, because Eryka’s in desperate need of someone with the right touch.

Business partners and lovers, Luca Reed and Dre Bennet are anxious to celebrate their upcoming anniversary. Together for nearly twenty years, they want something special…and naughty. Luca thinks he’s found it when he receives a mysterious email from a Ms. Calypso. She’s preparing to open her newest exotic resort and would like them to come and test out the amenities. Eager for a tropical vacation complete with a beautiful woman, both men agree, never expecting they’ve been set up by a matching making Goddess with an agenda of her own

This is a sexy short story that will no doubt blow your mind! At the beginning of the story the legendary Calypso has been giving a task from her long-time lover, Davie Jones. I was instantly drawn to this couple and curious to see how Calypso would proceed. When She finds Eryka Desmonte and realizes she wants to live out her fantasy of having two men, she knew who those two men would be and just where and how they should meet. Luca and Dre are a married couple and they don't mind getting it on with a pretty girl every now and then, so as a surprise to Luca, Dre sets up a perfect vacation featuring Eyrka at the beautiful, sensual Club Ecstasy Caicos. There all three embark on a incredible kinky journey that left all three satisfied sexually and the start of a romance that left Luca and Dre falling for sweet seductive Eryka.

Twice the Chance, Twice the Ecstasy left me in a puddle of goo. It was so seductive and sensual, and beyond kinky...my favorite kind of romance! Every turn of the page promised kinky delights and naughty playful moments that left me more intrigued with Club Ecstasy Caicos. Dakota Trace sure knew what she was doing when she put this story together. It was spaced beautifully with some of the HOTTEST sex I have read and the pure love that Luca and Dre had for each other was just amazing and awe inspiring. When she threw Eryka into the mix, this sexy two-some became a three some that left me blown away with envy and left me needing a cold shower and a fan.

I honestly want to see LOTS more stories from Club Ecstasy Caicos. I can definitely see this series will be one I will be anticipating with every new story Miss Trace sends out into the world. I give this an OUTSTANDING FIVE OUT OF FIVE STARS! Its incredibly written, with some fantastic characters, wonderful sexy scenes, and some of the purest romance out there. MORE PLEASE!!
Posted by Marie's Tempting Reads at 9:10 AM