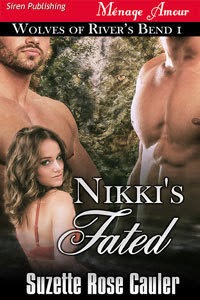 Wolf shifter Nikki Black never expected her love life to mean the difference between lasting peace and all-out war. Especially when her fated, Luke Andres, wants nothing to do with her. Forced to join to prevent bloodshed between their rival clans, Nikki and Luke enjoy a blistering night of passion before facing another complication—Luke’s brother is also Nikki’s destined mate.

Mason Andres is passionate, loving, and sexy, and Nikki falls hard for him, thrilled that he feels the same. She wants the same love-match with Luke, but that’s the one thing Luke can’t risk giving her. Fighting destiny to keep his heart safe from the only woman who can claim it, Luke makes plans that could separate them for good. But when love and passion run soul-deep, fate can overturn even the best-laid plans.

Will Luke admit his love for Nikki before it’s too late, or will his wounded heart destroy the trio’s shot at lasting happiness?

I am always excited and eager to read an author from Siren Publishing because they have some of the most talented authors. Suzette Rose Cauler is definitely one of those authors. Nikki's Fated was a really great paranormal erotic romance. It had menage, romance, passion, and is well written with a strong plot. I loved the characters. We have Nikki who is attracted to Luke her first mate, but who is trying really hard to distance herself from him because he doesn't really want a mate or think he needs one. I found her to be strong, determined, gorgeous, with a healthy sex life. Luke was the one character that I thought needed a good thrashing because he was just hoping to use Nikki for her body and just walk away and only come to her when he was in the need for sex. That changed however when we learned that Mason was also her mate. Luke is sexy with a really big ego but he also has a sweet side, even if he doesn't show it often. Mason was the guy that I really wanted. He is also sexy but has no problems with taking a mate and he shows Nikki often how much he means to her.  After a rocky start, these three get together often and have some of the HOTTEST sex imaginable. I really like how things change between Nikki and Luke when Mason comes into the picture and I definitely think it was for the better because these three were wonderful together, and not just in the physical sense either.


Even though I love and I mean LOOOVE a lot of sex in my romances, and yes, I know this is an erotic romance so there is always going to be more sex in these books, I still felt like the majority of the book was revolved around the sex. Mind you, this is both a good thing and a bad thing to me. The good thing is the sex is hot and there is always a variety of different ways these three have sex. The bad thing is, I feel like maybe there was...too much sex and not enough romance. I would just love to have seen them a little more outside the bedroom.

FOUR OUT OF FIVE STARS is the perfect rating for Nikki's Fated. Its a dynamite read with an easy plot, two sexy males and a sassy heroine. For those that enjoy  their romances featuring shifters and some seriously good sex, then Nikki's Fated is the book for you!

Posted by Marie's Tempting Reads at 10:13 AM