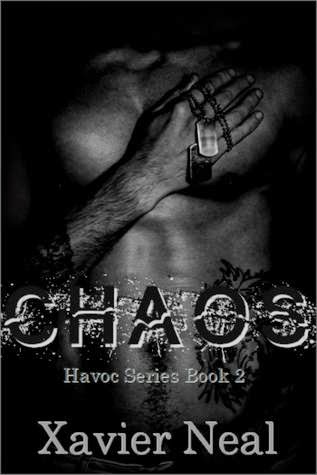 Clint "Grim" Walker has always been clear about two things in his life: his love of his Marine career and his love for Haven Davenport. His self-missions were clear: be the best Marine possible. Protect Haven at all costs. But when the two objectives collide they leave his once stable existence in chaos.

Chaos begins right where Havoc ended. So much happened in this story, the characters grew and a lot of wonderful things happened between Clint and Haven as well as between Clint and his father. I liked the fact that things  worked out with Haven and Clint, especially with the huge fight they had.

The one thing I can say about this book is it got me involved emotionally. There are not a lot of books that can make me cry and cheer and really support the characters yet Chaos did just that. There were times throughout the story when I just really wanted to give Haven a good shake but honestly, with everything that she went through, I sometimes couldn't blame her for how she is. Chaos is one of those books that you like yet hate at the same time: You like it because of the realism to it and the depth of the characters, you hate it because it makes you cry and hurt inside. I think that is why Chaos is a very likable story.

I give Chaos a FOUR SHOOTING STARS!! Its wonderfully emotional, with characters that were down to earth and who felt they could of been real. Xavier Neal created a story that gets you emotionally involved and ended it so you would come back for the next book.
Posted by Marie's Tempting Reads at 10:55 AM