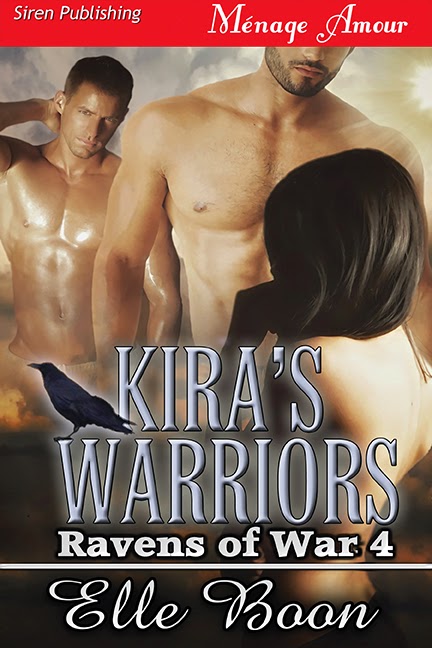 [Ménage Amour: Erotic Paranormal Ménage a Trois Romance, M/F/M, gods, HEA]
Kira lived the life of a pampered princess of a wealthy Japanese man who mourned the loss of his son and missing wife. She’d been given everything a girl could want, but nobody was allowed close enough to love or hurt her. All that changed when her life was threatened and he hired the Ravens as her security.
Thane and Garrick never expected to find their Fated, let alone that she’d be touched by a god. The legend of the Kitsune was steeped in mystery, but they’d need all the help they could get to save their Fated from the god who possessed her brother.
They’d need to travel into the deepest levels of hell and fight the Shinigami to save her and her brother. Kira realizes Thane and Garrick would give up their own lives to give her the family she’d never had. She would fight to hold onto the best things she could ever ask for, her warriors.

STUNNING! That is the first word that pops in my head when I think about Kira's Warriors. I have followed this series and read and reviewed since book one, and I am ALWAYS amazed at how Elle Boon gets better and better with each new book. Kira's Warriors may have topped all the rest so far though. You can see all the hard work and research she put into this book. I loved the whole Japanese themed demons and curses. I was so impressed with Kira's Warriors and wonder if this may well be my favorite. I thought Two For Tamara was my favorite until this one. I loved Kira and how incredibly strong and powerful she is. But I have to say I loved Thane and Garrick more though. They are super protective, patient, devastatingly gorgeous, and just as powerful, especially as they start the bond between their fated.

Elle Boon created a unique masterpiece with this particular Ravens of War story. The characters are empowering and enchanting, yet sexy and determined while the story will take your breath away and keep you biting your nails till the end. The sex is hotter then the fires of hell and there is also some serious drama and suspense that will keep you at the edge of your seat.

As you can tell, I adored Kira's Warriors SO HARD! That is why I give it a FULL FIVE SHOOTING STARS!!! Its splendidly detailed and written to perfection with some wickedly hot sex and the perfect blend of Japanese legend and culture. Elle Boon did a remarkable job with Kira's Warriors. Can't imagine it can get better, but with Elle Boon at the helm, I won't be surprised if it does.

Posted by Marie's Tempting Reads at 11:31 AM