ARC Review - Until The End (A Final Hour Novel #3) by Juno Rushdan! 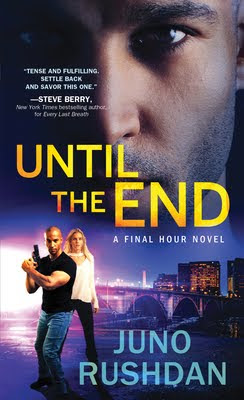 He's strong. Fierce. Relentless.
And he may be her only chance of surviving the night.
Gray Box operative Castle Kinkade always gets the job done, no matter how tough the assignment. But when he agrees to protect white-hat hacker Kit Westcott, Castle's loyalty is tested like never before. Trapped in the closest of quarters, protective instincts flaring, he can feel the ice surrounding his heart melt...and he knows he'd do anything to keep Kit safe.
Even defy the rules that shaped his life.
Castle is the last person Kit should confide in, let alone be attracted to, but he's the only ally she has left. Under threat of imminent attack—and a chilling conspiracy that hits too close to home—Castle and Kit are forced to put their hearts and lives on the line...and stop at nothing to face the greatest danger the world has ever known.
The Final Hour Series:
Every Last Breath
Nothing to Fear
Until the End
MY REVIEW:

Another OUTFREAKINGSTNDING, EXHILARATING, ACTION-PACKED ROMANTIC SUSPENSE OF MAJOR EPIC-NESS I AM OFFICIALLY AND HAPPILY BLOWN AWAY!

Juno Rushdan had me on the very EDGE of my seat with the third Final Hour novel. Sexy, unpredictable, with nail biting suspense and twists I did not see coming. Castle and Kit's chemistry is hot and wild from the start and oh wow, did I love every minute of their story and amazing romance. Its an intense book that I am officially in love with!

Until The End gets an INTENSE AND HEAT FILLED FIVE ACTION-PACKED STARS!

Posted by Marie's Tempting Reads at 10:58 AM