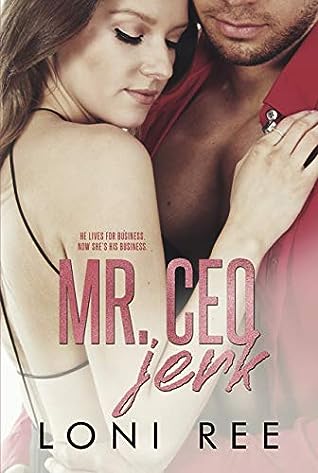 Meredith Maxwell
Life is good! This week I’m graduating and moving on to my new job, teaching munchkins. Although I’ll miss all my friends at the coffee shop, I sure won’t miss the jerk that came into Bon Java last week and ruined my day. There was no reason for the jerk to be so rude. After all, the spilled coffee was all his fault.

Tate Bennett
I can’t forget her. I know she’s too young, but my heart and soul belong to her. The girl owns me and she doesn’t even know it.

An invitation to a graduation party for a friend’s sister, brings Tate face to face with temptation and he discovers that he’s been mislead. The girl who owns his heart is much older than he was lead to believe. Now, he’s going to stop fighting the inevitable and starting fighting to get his girl.

Mr. CEO Jerk is such a sizzling hot romance that made me giggle, sigh in a big way and turned my heart into utter mush!

Loni Ree didn't fail me yet with her latest release. Mr. CEO Jerk made my heart sing for joy and had me moaning out loud. Tate is dreamy and sexy and 100% alpha and I LOOOOOVED him. And Meredith is such a strong force to be reckoned with with her fiery and yet vulnerable spirit and how she clashes with Tate just makes the blood pump strongly through my veins. I could feel the fireworks coming off these two from the first meet and things just got stronger and better on the next one which changed EVERYTHING. This was such a fantastic read!