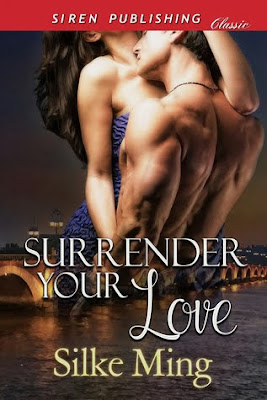 When twenty-nine year old chef Jason Hirona meets fifty-two year old artist and divorcée Martha Holland, he is immediately smitten with her and invites her to lunch, but she is a little wary of his intentions, especially since he is so much younger than she is. He convinces her to join him and sparks start to fly. In spite of his tender age, Jason is mature, and they have a lot in common. He invites her to his home in Bordeaux, France, and the age difference no longer plays a role in their relationship, until her son, Joshua, who is the same age as Jason keeps reminding her of it.
Joshua is not fond of Jason and schemes to bring his parents back together. Martha can only think of the abuse she suffered, and cuts off the relationship with her cunning son. She finds solace in Jason’s arms and a new life in Bordeaux where Jason works as one of the city’s top chefs.

The newest book from Silke Ming, Surrender Your Love is a sexy younger man/older woman romance that was quite...delicious! The hero, even though he was a lot younger than the heroine, was charming and secure in his love with her. It was very beautiful and sexy. Even though I am very fond of Miss Ming's MFM stories, her M/F story was just as HOT and DELICIOUS as her MFM stories.

Surrender Your Love felt like it was more...heartfelt. It was sexy, sigh-worthy and the fact that we have a younger man that is all about showing his woman that age is just a number just...melted me! I can't get enough of Miss Ming's stories and I wouldn't mind a few more MF romances just like this one because I am kind of smitten with it!