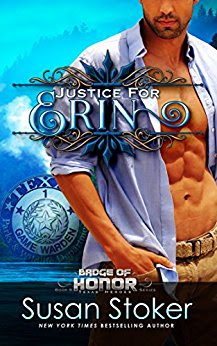 Blurb:
Part-time bartender Erin Gardner is friendly to everyone who bellies up to her bar, including the local law enforcement and firefighters who keep her city safe. That’s where she meets game warden Conor Paxton, a regular who asks to join a canoeing trip she’s leading for her university day job. When the trip leads to something more, Erin couldn’t be happier. Conor adores Erin, more than enough to help her continue to get over lingering self-esteem issues from her childhood. He’s thrilled he’s found someone who enjoys spending time in nature as much as he does. Just when the couple thinks they’re on their way to a happily ever after, Erin finds herself in the wrong place at the wrong time. But there’s no way she’ll just lay down and die. She’s woman enough to save herself―and lead her man to her when she’s done. Justice for Erin is the 9th book in the Badge of Honor: Texas Heroes Series. Each book is a stand-alone, with no cliffhanger endings.

The next book in Susan Stoker's Badge Of Honor series is really something special! Erin has issues with food and had at one time dealt with her weight. She has scars inside and out that make things hard for her and nervous when dealing with food. But the OUTSTANDING way Conor shows her just how beautiful she is and was inside and out, had me falling head over heels for him. This romance is sweet, with the right amount of suspense and action with a hero that knows how to make his woman feel special and cared for. Susan Stoker gets some major points for making me feel some strong emotions with this particular story. It touched my heart, made me sigh, bite my lip, eager to turn the page to see what happens next. This story made me tear up and made want to swoon and sigh and wish for a man JUST like Conor!

Justice For Erin brings real life issues to the forefront. It makes you open your eyes to everything to do with weight...whether its weight loss or gain. It makes you see that EVERYONE has issues and that EVERYONE is beautiful no matter how big or small a person is. And at the same time Justice For Erin has the suspense and sizzling romance you can expect from Susan Stoker.

Justice For Erin gets a TOUCHING FIVE SHOOTING STARS! Its an absolute MUST read!
Amazon  B&N  Kobo  iTunes
About the Author:

New York Times, USA Today, and Wall Street Journal Bestselling Author, Susan Stoker has a heart as big as the state of Texas where she lives, but this all-American girl has also spent the last fourteen years living in Missouri, California, Colorado, and Indiana. She's married to a retired Army man who now gets to follow her around the country. She debuted her first series in 2014 and quickly followed that up with the SEAL of Protection Series, which solidified her love of writing and creating stories readers can get lost in.
Website  Newsletter  Goodreads  Amazon  Facebook  Twitter
Posted by Marie's Tempting Reads at 8:25 AM