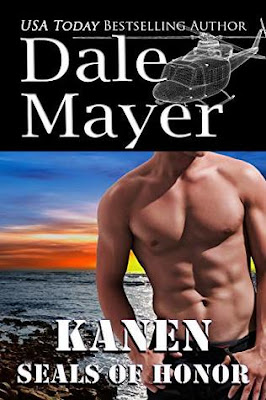 His best friend’s wife is in trouble…

A panicked phone call sends Kanan flying across the ocean to find that she’s been held captive in her apartment, tortured for something her dead husband supposedly hid.


Only she knows nothing about it and her husband is, well, dead…


Dead men don’t talk – or do they? As they unravel the mystery Kanan has to delve into his friend’s life to see what he’d done that put his wife in jeopardy. And find her captor, before he decides to kill her.


Laysa doesn’t know what this man wants, but after seeing Kanan again after so long she knows what she wants. But is it a betrayal of her husband? Then why was her husband hiding things?


And why did her captor want them? Even worse, if he got them in his possession, what was he planning to do with them?

Oh thank goodness for this newest book in Dale Mayer's SEALS of Honor series! Kanen was a adrenaline inducing, thrilling, dangerous romantic suspense that included lots of passion, secrets, twists and turns and a unforgettable romance!

Kanen was a round house kick of awesome! I loved how the story started off with some good action and as the story continued it was a roller coaster of danger and sizzling romance. It was GOOD!

Posted by Marie's Tempting Reads at 8:30 AM