ARC Review - Stolen By The Sea Lord by Starla Night! 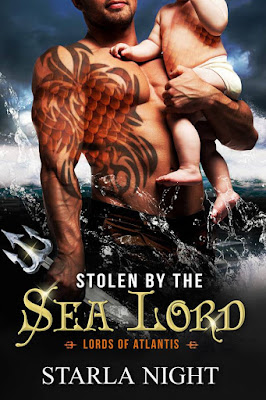 Tattooed mer-shifters are climbing out of the secret depths to claim their soul mates and save their race! Tormented warlord Elan, once highly respected First Lieutenant of undersea mer city Dragao Azul, lost everything the night his son was born. Unable to protect his fierce human wife from the ancient covenant that forced her to the surface, separated from his precious newborn son, and himself forced into the role of General in a war he does not believe in, he sank into deadly darkness … and escaped. Now carrying secret knowledge that could change the face of the war, he lives only to reunite his family — no matter the cost. Zara almost died the night she was forced to the surface. Shattered memories are all that remain in her broken heart. Suddenly, Elan stands before her like a mirage. Heart-stopping, mouth-watering, and all hers. And he has returned with her son. His people will stop at nothing to enforce the ancient covenant, and yet Elan claims Zara has a mysterious, untapped power that can protect them. If she can’t, then not only will their family be ripped apart, but the ancient traditions will win — and the hope for the future of the mer-human partnerships will be lost forever. Contains steamy mer-shifter love scenes, a warrior who thinks he’s beyond redemption, and a curvy female who’s about to prove him wrong! Author's note: the ebook is releasing in the Sirens and Scales anthology. This paperback is a racier story.

I have been highly anticipating Elan's story for a while now. And it was...FANTASTIC! A little different, a lot of this story took place on land. It showed the hurt, the struggle, the passion, and the love that never really died between Elan and Zara. And we get to see the bond Zara got to make with her son, after she hadn't seen him in a year thanks to her being taken away from Elan and Drageo Azul.

This was such a great read! Full of the dangers from a lot of the mer community and working on retrust and love on the surface with Zara, I feel like Elan had his work cut out for him but it made for one incredible story! And we learn HOW Elan and Zara met and I have to say, it had endured Elan to me even more than I could ever imagine. I just LOVED and ADORED Stolen By The Sea Lord SO MUCH! Even though Torun will always be my #1, Elan is a close second. He is strong, sexy, determined, caring, sweet, and perfectly arrogant at times that had me wanting to swoon. Zara is bold, brave, feisty and her attitude was a lot different than some of the previous heroines and I really liked that. She had no problems telling Elan how she felt and how hurt she was and the way she works at getting closer to her son and finally forming the bond that should of been formed the year before was something significantly precious that had me sniffling. This story certainly won me over and I can't wait for MANY more mer tales!

Stolen By The Sea Lord gets a MIGHTY SWOON WORTHY FIVE SHOOTING STARS! I can't get enough of these mer stories. Starla Night takes me away under the sea full of amazing scenes, great characters, and irresistible stories.