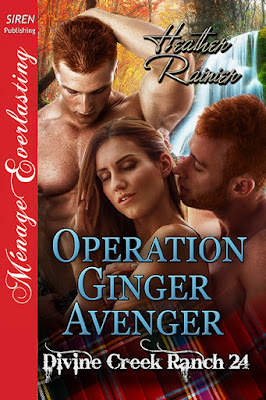 MY REVIEW:
I have been anticipating Jessica's story for a LONG time, ever since Val and Ransome rescued her in Divine Charity and I am so...SOOOOO happy to say that this book did NOT disappoint! It had all the FEELS I know and love from Miss Heather Rainier's delectable Divine stories and we get a truly phenomenal storyline, some favorite characters from over in Lusty, and many of our favorite Divine characters. The amazing romance, the sizzling sex, and the heart-wrenching moments and the heart stopping action I found in Operation Ginger Avenger had me savoring EVERY. SINGLE. PAGE. Of this unforgettable story.
I have had a HUGE crush on Tank and Troy since the moment these two Ginger hotties have protected Jessica when she first got rescued from her abuser. And they have just continued to add to my affection with them with every action and loving words as Jessica slowly comes out of her shell and works through everything that happened to her. This story had me sniffling out loud, had me practically laughing until I peed myself and had me oohing and ahhing not to mention all the truly heart melting moments and all those pantie melting scenes that had me vibrating with heat! I think with everything that Jessica went through and the incredible way Tank and Troy was with her, both in and out of the bedroom, had my heart sighing and my soul singing. It touched me in a way that I am actually having a difficult time trying to explain. It was THAT profound!  I treasured Operation Ginger Avenger! One of the BEST books in The Divine Creek Ranch series!
OGA gets a BRILLIANTLY STUNNING FIVE SHOOTING STARS! Its HOT, Its EXCITING, and its PERFECT!

CHECK OUT AN EXCERPT HERE:

“What were you talking about?” Jessica asked. Before Troy could say something about the weather, Tank blurted out, “Keeping you warm when it’s cold.” Her half-smile disappeared, and she wrapped her arms around herself. The way she turned to the doorframe and hunched her shoulders was the last straw for him. In a gentle but firm tone, he said, “Come here, Jessica.” Hesitating, she met his gaze and held it as she inched into the room, her arms still tight around herself. When she drew close enough he could touch her, he could see the goosebumps on her arms. Troy sat on the other end of the couch, and they drew her down between them. Careful to not make her feel trapped, Tank unclenched one of her hands from where it gripped her upper arm. “You were somewhere else for a few seconds there. Tell us where you went.” The bones and tendons in her hand felt delicate between his fingers as he stroked her and then enclosed her hand between his. Her breathing slowed to a more natural rhythm as she watched his hands, and Tank felt her fingers twitch within his grasp. “Your hands are so warm. Gentle. Feels good.” Troy inched closer, and she looked over her shoulder at him when he brushed her long dark hair behind her. “Can you tell us?” “There was a draft in the hallway.” With a light shrug, she attempted to make light of her earlier reaction. She lifted her eyes to his. Tank admired her brave attempt to make light of her reaction, but he shook his head. “Are we trustworthy?” With a tilt of her head and a sudden sweet smile, she nodded. “Of course.” “You can trust us with the bad stuff, too. Tell us. This is not therapy. It’s building an honest relationship based on the truth. We don’t want you to gloss over the parts of your life that you think are ugly.” Her throat bobbed a little as she swallowed her fear, and the gulp was audible. “I-uh...It was winter when he took me. The house was old, poorly insulated if at all. He would leave me chained up for hours at a time while he was gone. When he left, he would shut off the power to the house...and the heat. I think he did it to wear me down, to be mean. The cold was damp, and it got into me so deep there were times I was sure I’d never feel warm again. I never heard any road noise or signs of civilization, so I had no reason to hope I’d be found. I used to love the winter...” She shivered as some distant memory darkened her gaze. With a slowness that belied the eagerness Tank knew he felt, Troy wrapped his arms around her shoulders and leaned in enough to share his heat against her back. She stilled and locked gazes with Tank as she took in a shaky breath, on the verge of either shrugging out of Troy’s hesitant embrace or... She lifted her hands to Troy’s forearms and rested them there. “He took so much from me. Even though he’s rotting in prison, he’s still taking from me.” “Only if you let him, Jess. Don’t let what happened in the past keep you from your future. Bella’s future. Does what Troy is doing right now hurt?” She shook her head. “What if he tightened his arms?” Uncertainty stiffened her grip on Troy’s arms, but Troy remained relaxed, loose in his hold on her as he said, “I’d love to hold you tight, Jess, but not if it scares you.” “You don’t scare me,” she muttered as she looked away. “Damn it. I hate what he did, what he took from me.” “Let us take care of you,” Tank murmured as he lifted a hand and stroked her hair back behind her ear. “How can you stand the constant seesaw, though? I want to be held. I want to try with you. But then I freeze up from a simple touch.” “Your fight-or-flight response kicks in. You can’t help it. You can only overcome it,” Troy whispered before kissing the side of her head. “Can Tank kiss you?” “I...” It hurt to see her so torn, wanting to move on but unable to take the first step without her approval. It needed to be her that made the first move. Tank enclosed her other chilled hand and said, “Can you kiss me?” He was determined to overcome this first hurdle tonight.