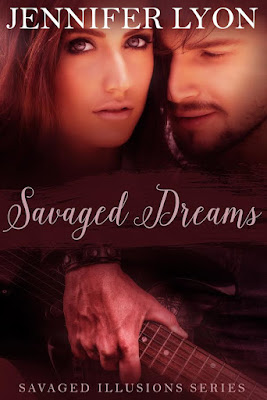 Going away to college gives LIZA GLASNER a chance to escape her painful and dangerous past…or so she thinks. At fourteen years old, she survived an attack by a famous musician. After that, the media, groupies and crazies hounded her with a merciless cruelty that ruined her life. But now she’s thriving—until an internship brings her face to face with the sizzling hot lead singer of a rock band, and she finds herself drawn to the very thing that once destroyed her. Justice is a temptation she can’t resist…and one that could get her killed.

Sexy rock star JUSTICE CADE is determined to take his band, Savaged Illusions, to the top by winning the Court of Rock T.V. show. Tortured by guilt for failing his family, he believes fame is his only path to redemption. But when the fiery college-intern hiding her beauty beneath baggy sweaters and a snarky attitude bursts into his life, Justice is forced to choose between the woman he loves and the stardom he craves. The wrong choice will cost him more than he can bear.

**This is book one in a trilogy and ends on a cliffhanger. However the next two books are being released in July and September so readers won’t be stranded on the cliff for long!

I will NEVER get enough of  Jennifer Lyon's books. And this new trilogy is freaking AWESOME! I freaking L-O-V-E-D Savaged Dreams. I am not bothered at all by the cliff hanger. In fact I really REALLY liked how it ended. I feel anxious to get the next one to find out what will happen next. It makes me edgy...its a great feeling for a good story because it makes the book THAT much more filling. I fell in love with Liza and Justice from the start. The Rock-Star dynamic really is fresh. Savaged Dreams is sexy and edgy...with the perfect blend of drama, suspense and your emotions definitely get involved. It was AMAZING!

Savaged Dreams had some intense passion and sizzling sex! I fell in LOVE with the Rockstar lifestyle from the good and bad and everything in between and I really...REALLY liked how our rockstar fell in love with a feisty intern. The sparks just flew strong between these two and I enjoyed watching them tumble together. This book was addicting and I can't wait to find out what happens next!

Savaged Dreams gets a SAVAGELY GOOD FIVE SHOOTING STARS! It will leave you BEGGING for the next book.

For a few seconds they stood there watching before she became aware of Justice’s gaze on her. “What?”

“You look beautiful tonight. All damned night, I’ve watched you. Every time you laughed, it jolted straight to my cock. I wanted to yank you against me and kiss the hell out of you, show the entire ship that you’re mine.” He clenched his jaw, his eyes glinting. “I’ve never had this possessiveness over a woman.”

Energy crackled between them, a connection so magnetic she leaned into him. For years, Liza had felt like a burden forced on her aunt and uncle. The outside world judged her without even knowing her. But Justice did know her, and he wanted her. That sensation poured into the loneliest part of Liza, making her feel sexy, worthy and a little bit wary. She wanted to feel this, but not lose her head.

“Lust. This is just lust, right?” She needed something to tell herself, to hold on to. She wasn’t going to throw her life away or become her mom. “It’ll burn itself out.” Not destroy her.

His gaze scorched into hers. “That what it feels like to you? Like a couple orgasms will cure this attraction?” He fingered a lock of her hair. “Or will it whet your appetite for more?”

Jennifer Lyon is the pseudonym for USA Today Bestselling Author Jennifer Apodaca. Jen lives in Southern California where she continually plots ways to convince her husband that they should get a dog. After all, they met at the dog pound, fell in love, married and had three wonderful sons. So far, however, she has failed in her doggy endeavor. She consoles herself by pouring her passion into writing books. To date, Jen has published more than fifteen books and novellas, including a fun and sexy mystery series and a variety of contemporary romances under the name Jennifer Apodaca. As Jennifer Lyon she created a dark, sizzling paranormal series, and The Plus One Chronicles, an emotionally sensual adult contemporary series. Jen’s won numerous awards and had her books translated into multiple languages, but she still hasn’t come up with a way to persuade her husband that they need a dog.

Giveaway
Jennifer is giving away a $50 Amazon Gift Card to celebrate the release of Savaged Dreams. Enter below!

Be sure to follow the tour, too! Find interviews, reviews and spotlights HERE!

a Rafflecopter giveaway
Posted by Marie's Tempting Reads at 7:30 AM