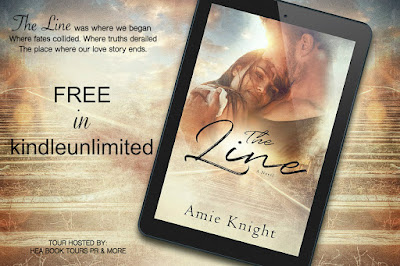 THE LINE by Amie Knight is available on Amazon and Kindle Unlimited! 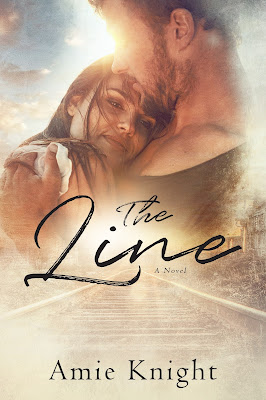 I was a thief.
The invisible girl only he could see.
The woman who wanted to be more.

He was the mark.
The extraordinary cowboy who stole my sixteen-year-old heart.
The damaged man who still owned it, even four years later.

The Line was where we began.
Where fates collided.
Where truths derailed.
The place where our love story ends.

ADD T YOUR TBR ON GOODREADS! 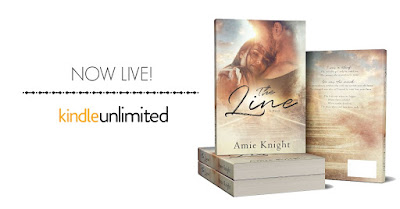 EXCERPT:
How could it be so damn hot at seven in the morning? I wasn't sure, but it was. Even in a thin tank, cut-off shorts, and my boots, I was melting. I stood at the top of a ladder Cole had placed against a tree so that we could reach the peaches up top. I used the rubber band on my wrist and tied my hair into a knot at the top of my head, hoping that it helped.

Cole climbed up behind me on the ladder and stood a couple of rungs below, but still, he towered over my small frame.

“Yep,” I answered, even though I wasn't okay. He was so close, and that familiar earthy, smoke smell I loved almost as much as rocky road invaded my senses.

“Good.” He looked at the peaches. “Alrighty. You see the ones that have that pink color?” He motioned to a cluster of fruit in front of us.

I nodded, trying not to breathe in too much. Because Jesus, he smelled delicious.

“Those look ripe and done. The paler ones behind them don’t look ready yet.”

I nodded again, and Cole grabbed my hand. He pressed his fingers in, wrapping both of our hands around a peach. He pushed the tips of his fingers into mine at the top of the fruit, near the stem.

“Feel the give, how it feels soft there?”

I squeezed my fingers around the stem again without his help and said, “Yep. Feels softer there.”

He smiled down at me. “Good. That’s also a sign it’s ripe for picking. But be gentle. They bruise easily.”

Cole’s front pressed closer to my back, and I shivered. The way Cole taught me to do things here was pure torture. It was also outright ecstasy. I lived for these moments as much as I loathed them. Because the man was a damn tease. He’d sent me back to the big house a sweaty, panting mess more times than I could count, my panties drenched.

He gently squeezed our hands around the peach and twisted and pulled. The peach came free, my tiny hand gripped it and his big, rough hand wrapped around mine. He brought our hands to my face and pressed the peach closer to my nose.

“How does it smell?” he asked in my ear.

I wanted to say, “I don't know. I can’t smell a damn thing but your smoke and leather, and I don't want to.”

Instead, I closed my eyes. I pressed my nose right up against the peach and concentrated on the smell.

Our hands moved, and I felt the peach at my lips. My heart hammered and fire raced across my skin, and it had absolutely nothing to do with the weather.

Cole positioned himself even closer, and it seemed, in that moment, that every breath he took sucked up every bit of air in the atmosphere.

My own breath quickened, and a growl rumbled low in Cole’s chest.

“Taste it,” he whispered in my ear, his lips so close that I was sure he could taste me on them.

I opened my mouth and wrapped my lips around the fruit, the fuzzy skin tickling my lips. I bit down, and that rumble I heard from Cole made an appearance again. I moaned as I pressed my teeth to the fruit, the juicy sweetness of the peach sliding over my tongue.

“So good,” I groaned as Cole pulled our hands and the peach back. A little juice rolled down my chin and I attempted to lift my free hand to wipe it.

“I got it,” Cole said, brushing his hand over my chin, slowly picking the juice up with his finger, and ever-so-Goddamn-enticingly placing his finger in his mouth before sucking it clean like it was the best thing he’d ever put in his mouth.

“Delicious,” he said, his hooded eyes on mine as he popped his finger out of his mouth.

And fuck me. I swayed on that ladder, my own eyes closing as I willed my cowboy to kiss me with every breath I took. I made myself only will this about once a day, so I thought I was doing pretty good.

He brought our hands holding the peach to his mouth. He wrapped his mouth around it, his lips brushing my fingers, and I felt it deep in my core. I pressed my thighs together and swallowed a moan.

“Perfect,” he said, staring into my eyes. He held my gaze for a moment more before shaking his head and letting my hand, which was still clasped around the peach, go. Then he stepped off the ladder like he hadn't just made sweet, sweet love to that peach with his mouth right here in front of me.

I watched him walk off to another tree, place a ladder against it, and climb up like nothing in the world had happened. I kicked the rung of the ladder and turned back to the tree. Damn peach molester. 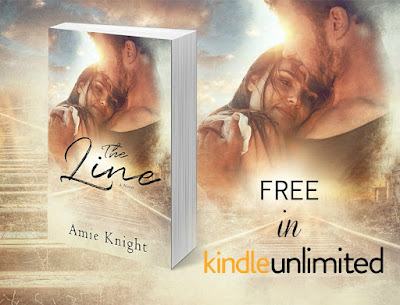 Amie Knight has been a reader for as long as she could remember and a romance lover since she could get her hands on her momma's books. A dedicated wife and mother with a love of music and makeup, she won’t ever be seen leaving the house without her eyebrows and eyelashes done just right. When she isn't reading and writing, you can catch her jamming out in the car with her two kids to '90s R&B, country, and showtunes. Amie draws inspiration from her childhood in Columbia, South Carolina, and can't imagine living anywhere other than the South. 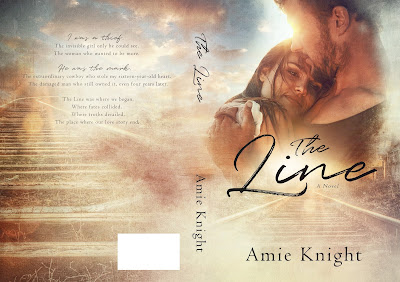