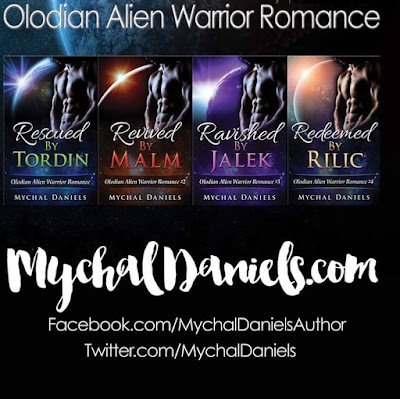 I am so happy to be hosting the AMAZING Mychal Daniels and her absolutely fantastic Olodian Alien Warrior Series on my blog today! Check out these awesome books in the series. Now I have one more surprise for you too! Mychal Daniels (also Michelle Spiva) allowed me to harass, I mean interview her. Make sure to see what I asked her and how she answered. There is also a giveaway at the bottom for all four books of her sexy Olodian Alien Warrior series and a giftcard! So make sure to enter, and good luck! 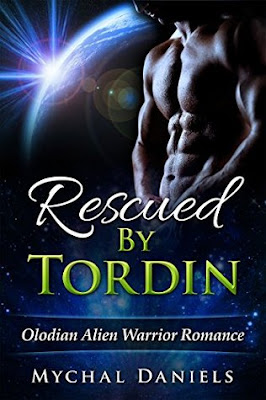 Curvy, intelligent and focused, Kyra Simmons has her eye on the prize. She’s locked her sights on becoming the top technical engineer for the most prestigious space program back on Earth. That is, until her life and plans are turned upside down in an instant on board a maintenance Space Station.

Stranded on the now failing Space station, Kyra needs a miracle to survive. She has no idea that the ‘foreign’ astronauts who show up to rescue her are out of this world—literally.

Warrior Lord Tordin, Crown Prince of Olodia, knows he’s outside of the Mandates of the Intergalactic Alliance when he intercedes to rescue the survivors of the Earth space station. But there’s something or someone pulling him in.

He’s not prepared for what he finds in the unassuming Earth female. Try as he might to stay away, the pull grows stronger and stronger to be with her. His mission depends on his ability to stay focused and be prepared, but that’s almost impossible with Kyra in his thoughts and dreams.

On the alien mother ship speeding away from Earth forever, Kyra’s biggest problem is not getting back to Earth; it’s how not to fall for this alien Warrior Lord who's the actual man of her dreams.

Can she find a way to realize her dreams of power and recognition now that she’s been rescued by Tordin? 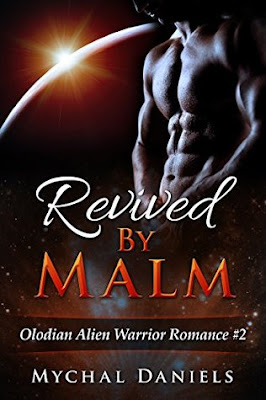 Who has time to miss coffee and chocolate when there’s an Alien Warrior superhero stealing hearts? Clever with a bright future ahead of her, Dr. Phoebe Brown has it all— intelligence, an enviable career as a highly respected doctor, beauty and brains. That is until her life is endangered on a failing maintenance Space Station. A heroic rescue by a fleet of honorable, if not unbelievably sexy Warrior Aliens, places a now comatose Phoebe in a new alien world. She wakes to find her entire life as she knew it is gone and she must start over—alone. Malm is the ultimate warrior, committed to fulfilling his duty as second-in-command to his cousin and friend, Tordin. So, when he experiences an undeniable pull and extraordinary attraction for the sleeping human female, he wants nothing more than to get her safely to his planet. There she can find a male worthy of her and… away from him. Will Phoebe be able to create a new life after Earth—alone—when her heart longs for the attention and touch of the one man who is the least interested—the one with the emerald eyes called Malm? 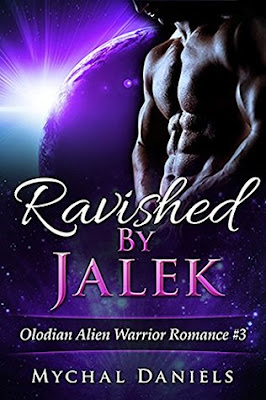 Book #3 in the Olodian Alien Warrior Romance Series A lost breathing mask is the least of Jalek’s problems… No nonsense Simona Crowley is great at what she does—even if she has to prove it at every turn. As a lead investigator for the Global Space Federation of Earth, she will stop at nothing to find the truth. When she follows a hunch to re-investigate the ghostly space station that became a global tragedy for the history books, Simona finds a strange apparatus that could very well be alien technology. Could this be the evidence that proves intelligent alien beings exist? Holding the contraption up for a better view, she’s caught off guard when a large, tall ‘astronaut’ intruder appears from heaven only knows where. Intent on finding out the truth about its origins, there’s no way Simona is letting him get his hands on the find of a lifetime—no matter how irresistible she finds him. Will Jalek be able to resist the seductive pull of this female or risk exposing her to the truth? A truth that could be the start of a multi-galactic war. 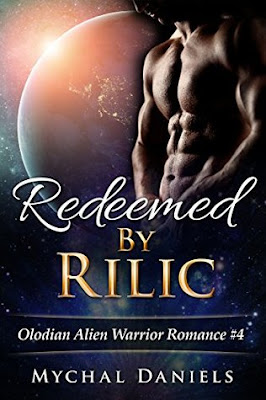 Avery Chambers just wants to be left alone to do her research and... make history.

As a crew member of the long-term Earth expedition to find Alien Life, Avery is the head botanist and producer of living food for the expedition fleet. When something goes terribly wrong and she's blamed for contaminating the crew, she must find a way to redeem her work and good name--even if it means accepting the help from a too sexy for his own good god-like Alien, named Rilic.

1. Ok, so readers (I admit, ME) want to know how you came to be a writer? Did you always want to write?

No, I wanted to be a singer. My mother was a voracious reader and instilled a love of reading into me and many of my siblings. I loved the escape reading gave me and only considered writing when I was in a post-graduate degree program. The program was high stress, we weren’t really allowed to work and writing little stories for extra income seemed like a great idea.

My first stories were horrid, but I didn’t give up—even though the reviews suggested I should. Determined to learn the art and craft of storytelling, I began to write longer stories and people started to enjoy them. A few years later and I’m a full-time storyteller. I’m self-taught and charge myself to continue to learn always.

2. So we know you write this fantastic Olodian Warrior Romance Series which are Sci-fi romance, but what we want to know is
how did you decide to write these books?

It was a sort of request/challenge from another author. I was finishing up a contemporary romance two part story, when an author remarked on how my writing style (romantic suspense) would fit very well in SciFi romance. I was about to start a paranormal-shifter series and instead decided to let my imagination really run wild to go beyond the stars, where anything is possible.

3. How many more in this series do you plan on writing?

I’m currently working on book #5 of the series, Restored By Gordin. I believe the fans will enjoy what this new book has in store for them.

I originally thought this would be a three book series and then it took off and the fans started asking for more books.

I won’t say this is the last, but I won’t promise there will be more either. I do have plans for some of the other Warriors that haven’t been featured, but they might show up in other series. Too soon to say for sure.

4. Who is your favorite Olodian warrior and why?

Ah come on! That’s like asking who is your favorite child. I find that when I’m working on each story, that Alien Warrior is the one I’m focused on and want to know everything I can about. Each of them has their particular qualities that endear them to me. So, I’ll say each is special to me in his own way.

5. Which heroine from the series would you say do you like best?

Again, we’re talking about my “babies” here. I love each of my heroines because they come to me with the best story to tell. They are flawed in their strength. Yet, they still have a journey worth exploring. I like being able to root for them to get the prize and live the happy ever after.

6. Can you tell us a bit about your current WIP?

Sure! I’m currently working on Book #5 of this series and making notes on another one that will come after this book is complete.

In this WIP, we find Emperor Gordin and Ellery Chambers settling into a life of “roommates”. The transition is hard for both of them and manifest itself in unique ways for each. Emperor Gordin has to find a suitable way to interact with his charge, while Ellery must restore her faith in herself and others.
7. What do you stress out the most with this particular series?

Making sure to give the best possible story I can. I am a storyteller. The story is the biggest part for me. More so than trying to have individual parts that stand out, I strive to have a story where the components flow and work well together to make a great story.

8. Do you have a actor or model that represents what you think your favorite Olodian warrior looks like?

Ooh yum! I get to play Romance Hottie Casting Couch!
But seriously, I can only hope that they would become movies! And, if they did, I’d love for these gentlemen to play the heros.

The heroine—I like to allow my readers to find something of themselves in her and so the best cast would be YOU! I do make them women of color in my books because I got tired of not seeing me in the stories. BUT, the stories are written so that she is a little of every woman.

9. What is your favorite part about writing Sci-fi romances?

All the possibilities that live in the what if. SciFi Romance allows me to see myself in the possibility. As a woman of color, I can imagine that there are sexy Aliens who love all Earth women equally. I also imagine that all of them are the answers to many a fantasy and prayer as well. Writing SciFi Romance gives me the opportunity to explore my many whatifs without being questioned with any sort of history or proof that what I present couldn’t happen.

10. Do you think you will write more Sci-Fi romances other than this series?

Yes, I do. I already have a new series in the works that I believe readers will get a lot of fun reading.

a Rafflecopter giveaway
Posted by Marie's Tempting Reads at 8:39 AM