Netgalley ARC Review - Never Give You Up by Shady Grace! 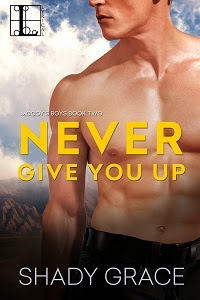 A life of crime—or a lifetime of love?

Mary Billing knows her solitary mountain life is over when a handsome stranger blows on to her land in an unmarked chopper. Terry McCoy is not only dangerous to the pretty widow’s shattered senses, he’s a hardened criminal no woman in her right mind would fall for. Yet there’s something tender about Terry—something that makes her surrender to his searing touch. Now Mary is in deep—deep enough to be taken hostage by a villain whose true target is Terry…


The son of a notorious crime boss, Terry is about to take over his murdered father’s multi-million dollar empire. But first there’s the little matter of avenging his father’s death—and rescuing the one woman he knows could turn his hard-bitten life around. Terry never wanted a life of crime, but suddenly he’s ready to do just about anything to bring Mary back…

I love this type of romance! Mobs, damsels in distress, a surprising hero that is both dangerous, alluring, and sexy as sin. This story is fabulous! The characters are ones I like and the story captured me from the very beginning. Its full of action, suspense, danger, love, and smoking hot chemistry!

After reading this book, I am eager to read more romances with sexy mob bosses, or sons of mob bosses in any case. I couldn't picture a son of a mob boss being such a delectable hero but dang, Shady Grace did a splendid job!

Never Give You Up gets a SCORCHING FOUR AND A HALF SHOOTING STARS!


Posted by Marie's Tempting Reads at 9:28 AM