Netgalley ARC Review - To Have And To Hold by Serena Bell!! 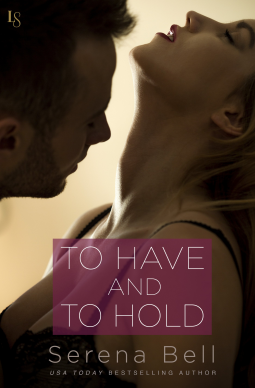 In this emotionally charged novel from the bestselling author of Hold on Tight (“Sweet, sexy, and real.”—Jessica Scott), a war hero fights to remember the love he left behind—and the woman who refuses to fade away.

The reunion is supposed to be the start of the rest of their lives. But when Trina Levine sees the soldier she promised to love forever, Hunter Cross looks at her like she's a stranger. The connection is gone, lost in the blank stare of those soulful brown eyes. Hunter remembers his young daughter but not Trina, and he certainly can't recall why Trina and her own child are living in his house. Although his lean, rugged frame bears the scars of battle, his mind took the worst hit.

But Hunter Cross hasn't forgotten everything. His body remembers caressing Trina's delicate curves, holding her close, never wanting to let go. Was it just a dream, or was it real life? Now, as he tries to put the pieces back together, Trina's the one who comforts him when his night terrors strike. It's Trina whose warm touch rekindles a connection no man could deny. Even with the odds stacked against them, Hunter wants to believe. Because passion has the power to awaken the past—and remake the future.

The synopsis for To Have And To Hold as well as this very pretty cover had me instantly intrigued. However, I was a tad disappointed. It lacked strong passion that I crave in my romances. But what it did have that made the story pretty worth it was the sweetness and emotional roller coaster ride the author Serena Bell took us on.

Even though there wasn't a lot of crackling passion, it was still a pretty decent read. I liked the characters as well as the secondary characters and think the cover is just perfect. There are so many ups and downs do to our hero Hunter having lost much of his memory of him and Trina. Even though he recognizes her, he doesn't feel the burning love that he had for her at the prologue. It does begin to grow again as he comes home from his tour and Trina is there to help him and slowly brings back the memories as well as the love.

This was a sweet read. I give it a FINE THREE SHOOTING STARS! Even though the romance didn't sizzle, I still found it sweet enough and the ups and downs brought real "feels" to the book.