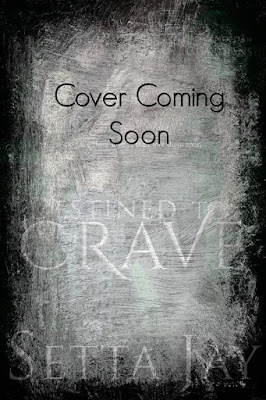 Fate gave them love… then tore them apart.

This standalone novella is the first spin-off from the Guardians of the Realms world!

The descendant of two almighty Gods and a Guardian of Earth, Eirykr “Rykr” is born of immense power. Yet, no amount of strength or skill can save him from the curse that tore him away from his first and only love. Turned into a shadowy assassin, he wields the demons bound to his soul with the ruthlessness of a blade. For nearly a decade, he’s searched for the key to free himself, all the while watching over and dangerously craving the beautiful mate who believes she’s driven him away.

Lucy is a born protector, a trait of her Guardian lineage. When her greatest gift was torn from her, leaving a gaping hole in her soul, she refuses to allow a young Rykr, her known mate, to suffer the same dire consequences. Her fear forces her to make a haunting decision and with a grave threat she crushes him, demanding they part for a decade. Yet, as the years pass she can feel him watching her from the shadows, conjuring wild fantasies that make her ache for him to finally end their torment.

As time ticks toward the decade mark, dark forces rush to descend. Will Rykr’s secret and relentless need to protect Lucy condemn them to a hopeless destiny of constant craving? Or will Lucy bind them for all eternity, no matter the violent threat to her very soul?

A NEW series starts with a SUPER FANTASTIC NEW STORY from one of my all time favorite Indie Authors, Setta Jay! Destined To Crave is about the descendants from her wildly addictive Guardians of the Realms. We get glimpses from some of our favorite Guardians and glimpses of all their offspring. And let me tell you all, this new book in her new series is another scorching, sizzling, EPIC series that will no doubt have you falling all over yourself to get to. Destined To Crave was seriously HOT, ULTRA sexy, and wickedly decadent. Rykr and Lucy are both offspring from the guardians and their romance sizzled, practically right off the pages! New danger and suspense lurks in this new story and I can't wait to see how everything will turn out!

Setta Jay writes some seriously great paranormal romances. Her characters just fly of the pages while her stories and descriptions make you feel like your in a whole new world. Its addicting and something I seriously crave. In this book we get new characters, some old, new elements as well as a new threat that just had me on the edge. But yet, the sex and matings were just as glorious and seductive and all consuming...just as you expect from Miss Setta. I am LOVING this new series so far!

Destined To Crave gets a FIREWORKS GOING OFF IN THE BACKGROUND FIVE SHOOTING STARS! Its utterly brilliant and oh so AMAZING!
Posted by Marie's Tempting Reads at 5:59 PM